About 100 days ago, the Pinterest product engineering team began experimenting with a three-day no-meeting schedule for individual contributors on our teams…

Product engineering at Pinterest is going to try three full no meeting days for engineers, really excited to see the effects of having a lot more focus time for the team.

Back in 2009, Paul Graham wrote the following, which speaks to this issue better than I can ever hope to:

In the interest of preserving these blocks of uninterrupted time, the product engineering organization at Pinterest experimented with putting 9AM-5PM no meeting blocks on engineers’ calendars from Tuesday–Thursday: 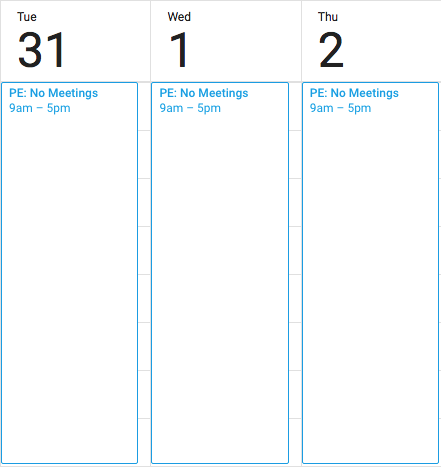 Over the past several months, product engineering managers have gotten very positive feedback about the three-day no-meeting schedule, and we recently sent out a three question survey about it.

The last question was for “other feedback,” and here are some of the positive responses:

Here are some of the neutral-to-negative responses:

Obviously there are trade-offs when making a change like this. However, we feel that three focused days with two days of meetings is better than scattered meetings throughout the week. The survey results also indicate that the majority of engineers share that sentiment.

Since sharing the results, several other engineering organizations at Pinterest have adopted the same no-meeting schedule. Here’s a message I received from an engineer on the protect team in response to his team adopting the schedule:

My manager suggested we do what your team did and prolong no meetings from 1 to 3 days. It’s hard for me to thank you enough for this initiative. Funnily enough the Paul Graham essay about manager schedule vs maker schedule was trending last night on HN and re-reading it I was just thinking that I would love to extend no meetings to 3 days, and today I come to the office to my manager bringing up that you guys tried it and we could too… Thanks so much man!

As engineering managers, it’s our job to provide the space and support needed to help our engineers deliver great software. It’s been amazing to see the impact of this seemingly small change on product engineering, and we’re really excited to see other engineering teams adopting it at Pinterest.