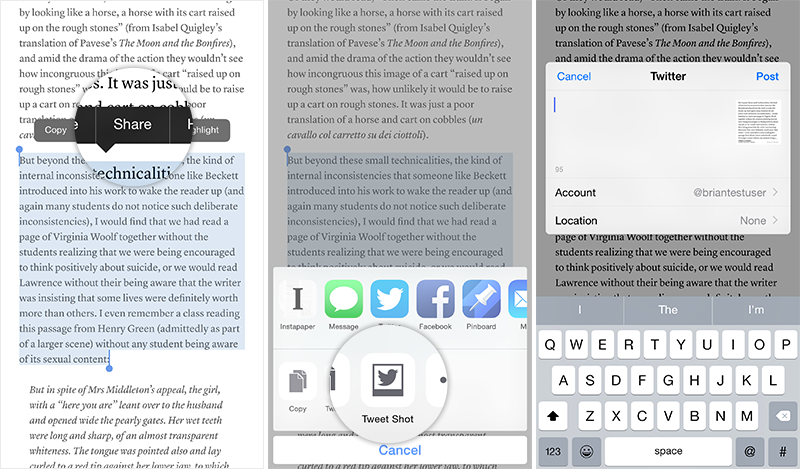 It’s amazing how a (somewhat) slight product change can define a whole new set of behaviors. On October 29th 2013, Twitter launched inline image previews directly in the timeline, allowing users to view images without clicking through a link. In the one year since inline images launched, there has been a trend of sharing screenshots of text (usually from mobile devices) to Twitter, which allows the user to share specific parts of an article without exceeding the 140 character limit…

At betaworks, we’ve been curious about this trend since it began and, by now, it has become pretty hard to miss if you’re working in technology. Some of the most prominent journalists and venture capitalists have been tweeting text shots, and with good reason. Look at the engagement difference between these two tweets about the same article:

Nikola Tesla predicted the iPhone - "A man will be able to carry one in his vest pocket” http://t.co/ADlkH1HpWR

I received a brief email from John Borthwick (CEO at betaworks):

I had spoken with Instapaper designers Justin Van Slembrouck and Aaron Kapor in the past about doing this, but the priority was always lower than some other, more pressing task. However, with the rise of tweet shots, apps being made to assist in the creation of those screenshots, and an imminent Instapaper iOS release, it made sense to take a day or so to try and build a tweet shot feature for Instapaper.

We started by looking at existing behaviors and identifying some obvious issues with the current process:

With the above in mind, we set out to make sure of the following for Instapaper tweet shots:

The first thing we nailed down was the three-tap send, which could actually be done in just two taps by users that had already created a highlight of the text they wanted to share:

We were able to achieve three-tap tweet shots by doing the following:

After some trial and error, we managed to finalize the layout of our tweet shots with the text in the user’s current font and article metadata & attribution in HelveticaNeue:

Then, we started working through some edge cases…

What happens if you only select one sentence?

What happens if I choose a very long selection?

Such wall of text pic.twitter.com/FQzQg4YZ6b

The line height is pretty bad here, but we’ll get to that later…

Lastly, we started testing a ton of different font and background combinations to determine if there were any weird edge cases:

With the broad strokes finished, our designer Aaron and I embarked on the painstaking task of going through every font in Instapaper and adjusting line heights & font size to make sure the images were perfectly set. After we completed all of the typography tweaks, I went through each of Instapaper’s 14 fonts, took screenshots for one sentence, two sentences, and a paragraph, and collected the generated image, the inline desktop view, and the inline mobile view for each screenshot in each font.

Once I collected all of the images, I sent them to Aaron for a final review. You can find the deliverable I sent him here if you’re interested.

We shipped the release version of Instapaper 6.2 to our TestFlight testers (tweet shots were one of four major features in this release) and, after a week, submitted to the App Store for review. Here are a few of the earliest tweet shots from Instapaper testers:

FS Me on White

.@bthdonohue the tweetshot have really a great design. I love them.

@dahanbn yes they are very handsome, lends itself to our strengths: simplicity & beautiful typography.

Twitter recently reintroduced embedded tweets in the timeline, but as far as I can tell, this is a totally original use of tweet shots, and it’s always really exciting to see someone use your product in a way that wasn’t explicitly intended. 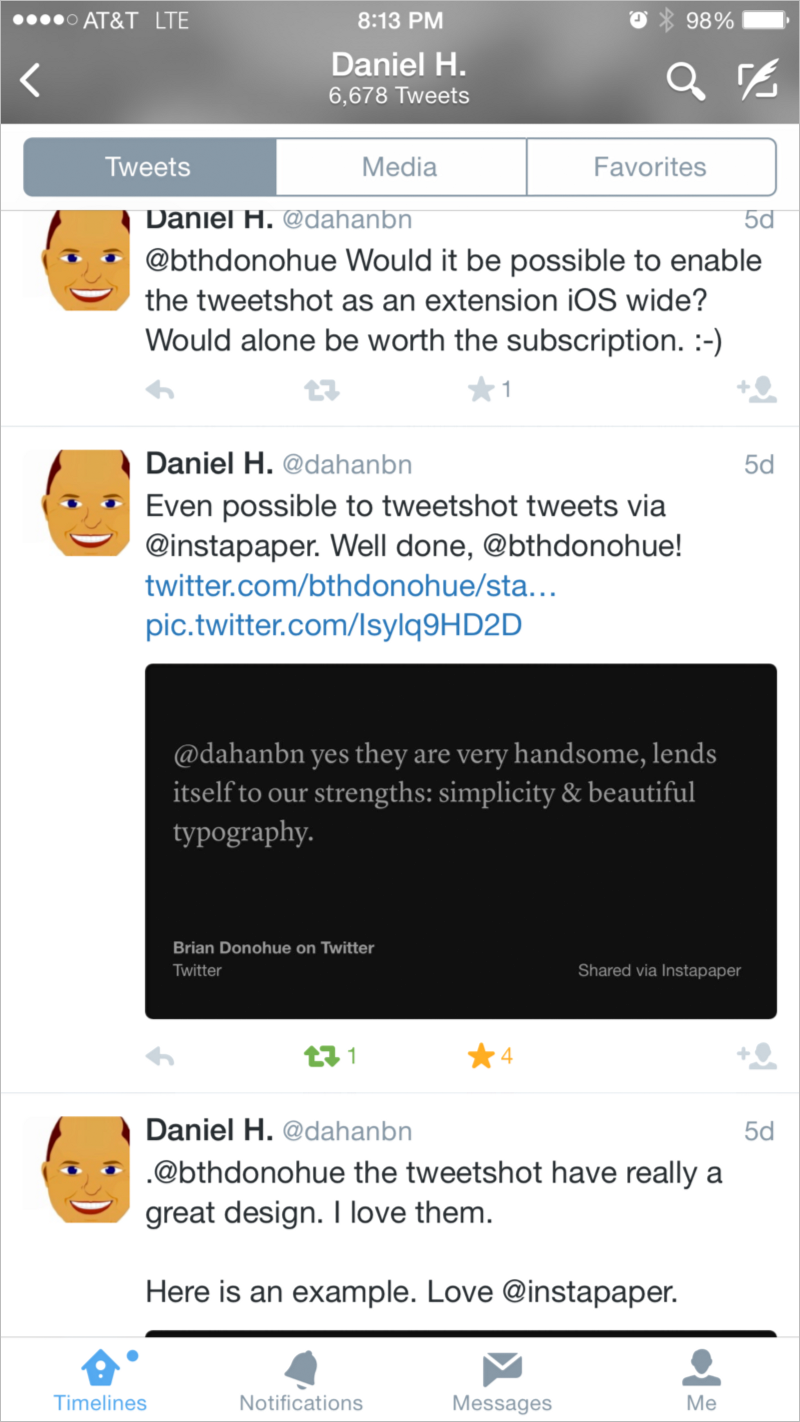